The NBA has recently locked in a $200 million dollar contract for Philadelphia 76ers center Ben Simmons. While the contract is very lucrative, it also sets a dangerous precedent and will likely lead to more teams trying to break their team up into two groups of stars and role players. Teams like San Antonio have already seen how giving superstars no-trade clauses can cripple fan excitement with lackluster seasons from lesser known players.

Ben Simmons contract is a litmus test for the NBA’s ill-advised supermax extension. The Sixers have to decide if they want to keep their star player or not.

The Philadelphia 76ers were decimated by injuries and NBA health and safety standards. The Sixers won eight of their first ten games to ascend to the top of the Eastern Conference, despite the lingering Ben Simmons drama. However, attrition took its toll. Joel Embiid tested positive for COVID-19 and missed nine games after missing time in the procedures.

During that time, Philadelphia only won twice. Since Embiid’s comeback on Nov. 27, the 76ers have gone 1–2. The Sixers are 11th in the East with an 11–11 record. While they are tied for the last play-in berth with the New York Knicks, the Knicks have a 2–0 head-to-head tiebreaker (it’s obviously too early to speak about tiebreakers, but it’s to highlight the point). The Sixers are part of a six-team group in the Eastern Conference that sits between sixth and eleventh. Someone will earn a berth in the main bracket, while another will not even get a consolation award.

The Simmons predicament looms big as the December 15 prohibition on moving players on new contracts approaches.

Ben Simmons is, kind of, with the Philadelphia 76ers. 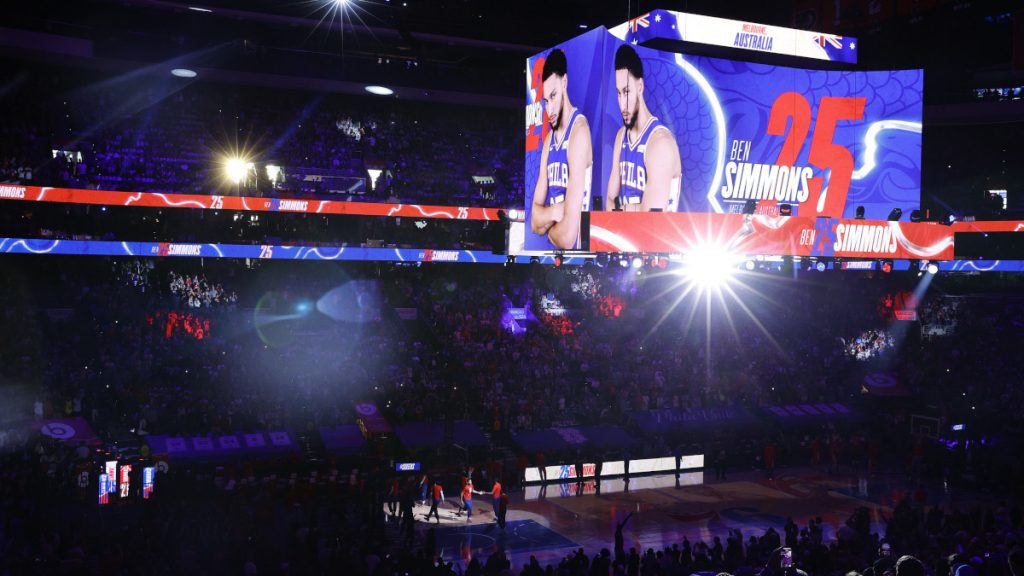 The Philadelphia 76ers have had a dark cloud with a No. 25 on it hovering over them since training camp. Despite the fact that he is in the first year of a five-year, $177.2 million designated rookie agreement signed with the organization in July 2019, Ben Simmons wants out.

In the 2011 collective bargaining agreement, the designated rookie extension, sometimes known as a supermax, was implemented. However, according to Spotrac, modifications in the 2017 CBA enable players who satisfy particular requirements to get a larger share of the wage limit.

Simmons agreed to a normal maximum extension in 2019, with a salary equivalent to 25% of the salary ceiling for each season. However, if Simmons meets any of the conditions in 2019–20, the arrangement allows it to become a supermax. That caveat was triggered by his All-NBA selection. This increased the yearly pay to 30% of the ceiling.

However, Simmons felt misled by the club after a poor playoff performance last season. He refused to report to training camp and sought a trade. Simmons ultimately joined the 76ers, was tossed out of practice, and then revealed his mental health issues to the team.

He’s now a member of the team. However, he is not a member of the team at the same moment. He visits the team’s facilities on occasion. He is not expected to return to the active roster any time soon. The most illuminating statement came from coach Doc Rivers on Dec. 1, according to a tweet from SInow’s Justin Grasso:

“I don’t even bring up [Simmons] in conversation.” I coach the squad and the folks I meet on a daily basis. … All of the other things is handled by [President of Basketball Operations Daryl Morey] and [General Manager Elton Brand].”

Doc Rivers is the head coach of the Philadelphia 76ers.

That seems to be first-rate organizational synergy. However, it addresses the elephant in the room in the NBA: the supermax isn’t operating as planned.

With Morey and Rivers in charge, he’s dissatisfied. Simmons, on the other hand, is in the first year of a deal designed to assist clubs, particularly small-market organizations, retain young players.

The designated veteran extension, which was implemented in the 2017 CBA, was designed to give teams more ammo to maintain players on their second contracts. A veteran supermax raises a star’s compensation to 35% of the cap for a five-year period.

The player’s present club may extend his contract for another year and pay him much more than any other team. The rationale was sound in principle.

In practice, it has been a shambles. Chris Paul and Russell Westbrook were moved twice after obtaining supermax contracts, one for each other. With a year left on his rookie supermax agreement, Anthony Davis fought his way out of the New Orleans Pelicans.

Simmons, who has yet to play a game under his massive deal, is now demanding a trade. While rumors of a Simmons-for-Westbrook trade have circulated, SI.com’s Doug McKain explains why such a deal is implausible at best.

That completely debunks the claim that it “assists clubs in retaining talent.”

There is no way to undo the ringing of the bell for the Philadelphia 76ers and the rest of the NBA.

The supermax isn’t going away anytime soon. Agents of players who qualify for the supermax will request them under the current CBA, which spans through 2023–24.

Players will not want to miss out on the massive prizes when the new round of haggling begins.

What should be done to address the issues that have been highlighted since 2017? The Ben Simmons-Philadelphia 76ers impasse has the potential to create a precedent that will irritate at least one side of the negotiation table.

The 76ers’ management and owners will be furious if the team caves in and trades Simmons for less than his market worth. If Philadelphia drags this out as Morey suggested earlier this year, players will take notes that might influence future CBA talks.

In the impasse that is Ben Simmons’ relationship with the Philadelphia 76ers, there are three facts. There will be a winner and a loser in this game. Most importantly, there will be reverberations across the NBA that might last for years.

RELATED: The Philadelphia 76ers were said to be considering a Ben Simmons trade, and now is the perfect time to pull the trigger.

The “ben simmons portland trail blazers” is the first player to sign a supermax contract in the NBA. The deal will set a precedent for players across the league.