Mids are the average reading from a particular day, while highs and lows indicate extreme readings. 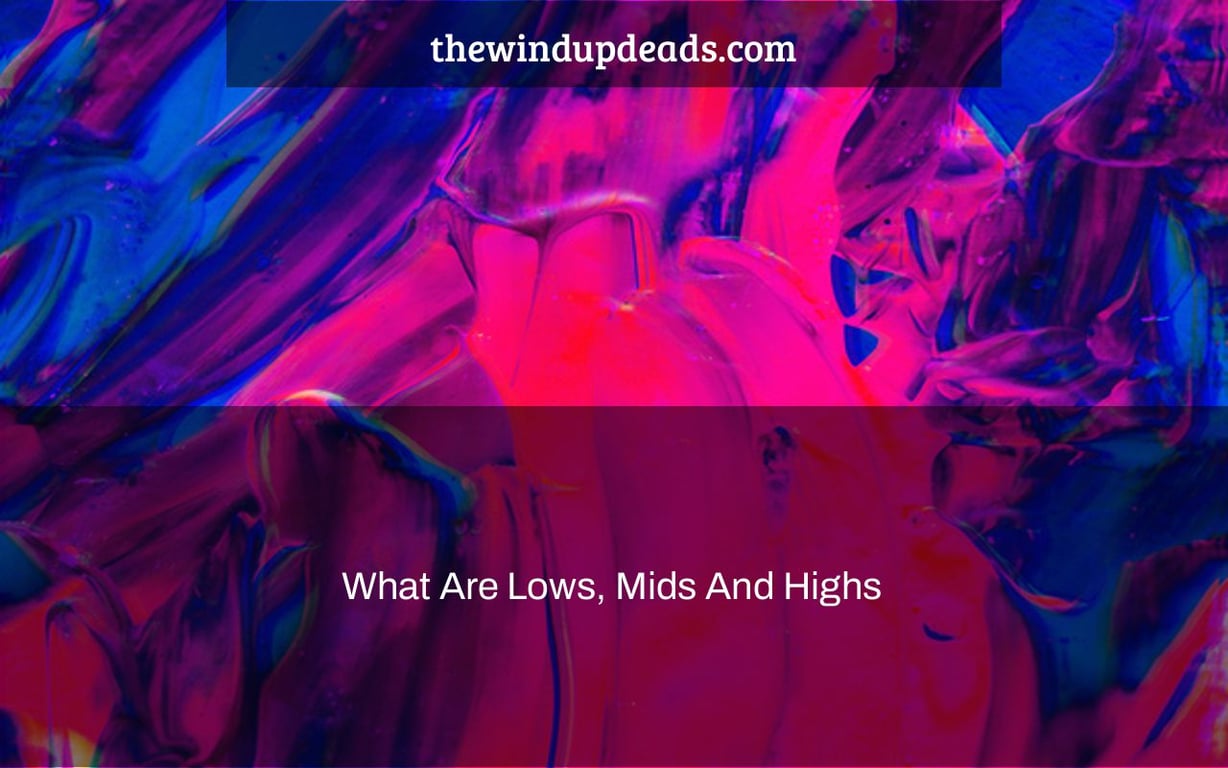 We earn money from qualifying purchases made on our website as an Amazon Associate.

When discussing sound, music professionals and lovers often refer to high, mid, and low-frequency waves. Sound waves are the motions of air molecules that our ears perceive as sound, and frequency refers to the number of cycles these waves complete in a second. But what are the differences between low, mid, and high-frequency sounds?

The audio we perceive is divided into three categories: low, mid, and high frequencies.

Here’s how it works:

Mids: The mid range encompasses frequencies between 250 and 2000 Hz. For the natural presentation of sound, particularly voices, this frequency range is critical.

Highs or Treble: The upper end of the frequency range starts at 2.048Hz and finishes at 20.000Hz, which is the human ear’s hearing limit (most people can’t hear noises beyond 16 KHz – see our guide on noise levels for more information). The high frequencies give your music a lot of clarity and detail. Too much high frequency, on the other hand, may be tiresome and fatiguing.

Check out the frequency ranges below for further information about sub frequencies:

What Exactly Are Lows?

The lowest notes in a song are usually heard in the bass or low range frequencies. Beats (presumably from an EDM song) or drums in general are the most well-known instruments in this spectrum.

This is the foundation upon which all other sounds are created in music. For music to sound entire and complete, many elements are essential, and the bass is undoubtedly one of them.

What Exactly Are Mids?

The most detectable sounds, such as musical instruments and the human voice, are generated in this frequency range, which is possibly the most important:

What Are Highs and Lows?

Treble (high frequency) is the harsh and sharp edge of the musical spectrum that breaks through everything else.

This is the highest heard spectrum of music frequencies. Flute, bells and whistles, chimes, and sometimes singers who can achieve incredibly high notes fall under this category. Highs may be heard in Future’s ‘Mask Off,’ which incorporates rapid flute music.

What Is The Difference Between Mids And Highs In A Speaker?

Woofers, mid-range speakers, and tweeters are all types of loudspeakers. All three kinds of speakers may be found in one enclosure, but they can also be found in separate enclosures. Let’s take a closer look at how they operate.

The frequency range that speakers output is used to categorise them. The term “full-range” refers to speakers that strive to reproduce all of the frequencies that are delivered to them.

Other speakers concentrate on a narrower range of topics. Notably,

You get a much broader, more accurate sound when you combine these independent speakers than you would with a single full-range speaker.

The Most Appropriate Frequency For Mids And Highs

The noises that lie between 200Hz and 5000Hz are referred to as mid-frequency sounds. This is the rate at which human speech may be derived intelligently. This sound spectrum has a small or horn-like quality to it.

Depending on the effectiveness of the listener’s hearing system, sounds with frequencies ranging from roughly 20 Hz to 20,000 Hz may be registered by the human ear.

The XM4s continue the heritage of Sony’s WH series, which has traditionally set the standard for timing and dynamics. Dynamic changes, such as transitions from quiet to loud, are easily expressed by the headphones.

They can amuse you with the most basic of rhythms and then easily shift to more sophisticated arrangements due to their ability to get into the rhythm of a song and keep to it.

These Y400s are a great wireless choice at a reasonable price. They’re lightweight and portable, well-made, and provide an energetic, expansive sound that raises the standard at this price range.

GRADO SR80x Wired Open Back Stereo from the Prestige Series…

Grado doesn’t need to rip up its own rules and remake its legendary headphones because it doesn’t have to. The SR80x’s upgrades, on the other hand, have increased its value in the correct direction.

We wouldn’t be surprised if the SR80 model stays the best on the market for this price for as long as wired headphones exist, considering its supremacy in this sector.

Are your vocals mid-range or high-range?

Obviously, this fluctuates based on the singer’s voice, but most voices have a frequency of more than 100 Hz.

Voices and voices are usually in the lower mid-range, therefore headphones with a defective or aberrant midrange may make vocals sound “wrong” or “remote.” In most circumstances, the lowest frequency band may be significantly filtered for voices.

Consider musical notes in terms of low, medium, and high-frequency sound. The lowest note on musical instruments including organs, tubas, pianos, and cellos lies between 5 and 70 Hz.

Low-frequency sound waves are perceived as “lower” by the human ear. You raise the lower frequency range when you crank up the bass on your audio. These are “rumbly” sounds that may be heard as well as felt.

Human speech may be intelligently extracted from mid-frequency audio, which falls between 500 and 2000 Hz. In the upper 2000 Hz region, when high-frequency sounds begin, there is a huge variety of audible sound.

As an example, the Middle C on the piano is a medium sound frequency sound that is just over 500 Hz.

Now that you have a better understanding of the numerous frequencies in audio, how they interact with other frequencies, and how individuals perceive them, pay attention to any music you listen to. Test your ability to tell the difference between the different ranges. Keep in mind that for your music to sound correct, all frequencies must be in harmony with one another. While listening to a music, it helps to maintain the volume between medium and high, or at an acceptable level. Isolate a single instrument and attempt to stay on top of it throughout the piece. This will help you enhance your listening skills and develop as an audiophile.

The “how to adjust highs mids and lows” is a question that has been asked many times before. It is important to know how to properly set the highs, mids, and lows on your speaker system.