The NBA Draft is one of the most anticipated moments in a college basketball player’s career. With so much hype, players are often underprepared for their draft night experience, which can lead to embarrassing results. 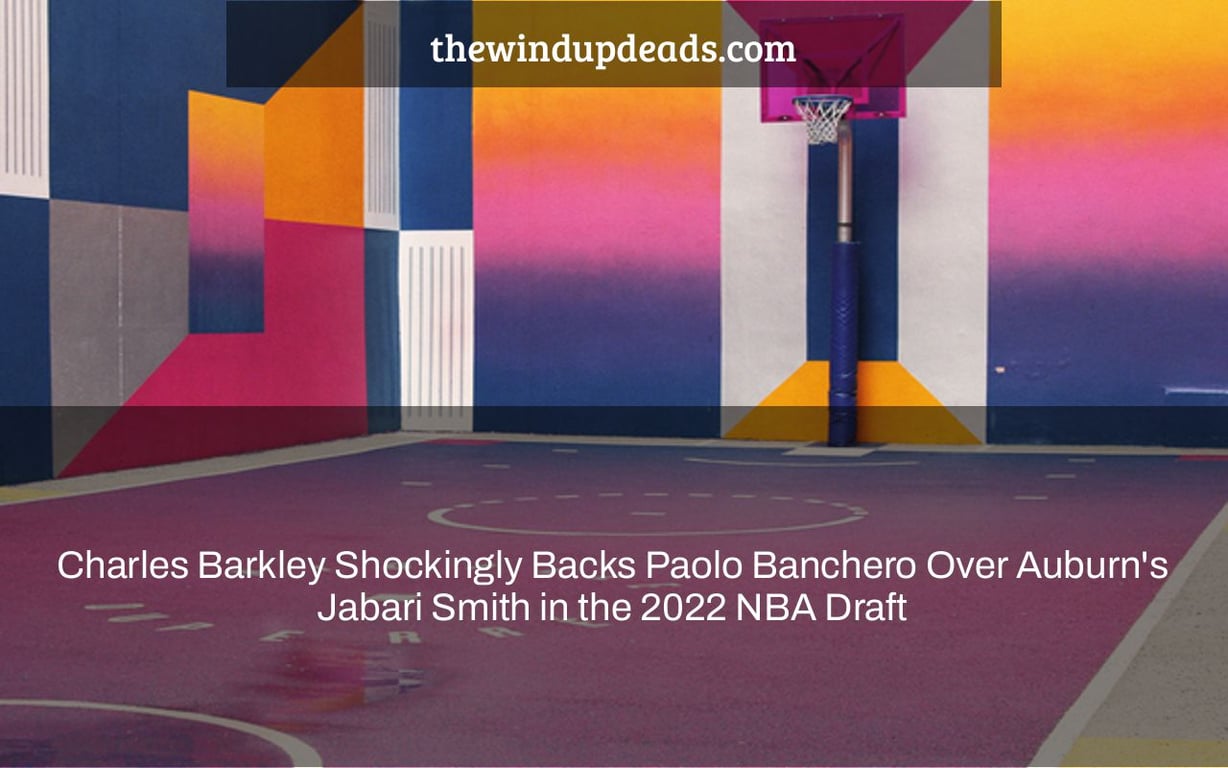 Those who have seen NCAA Tournament coverage know that Charles Barkley and Kenny Smith are the subjects of some partiality. The mainstays of Inside the NBA make no apologies for their March Madness fandoms, with Chuck cheering for his Auburn Tigers and The Jet going for the North Carolina Tar Heels.

Despite his admiration for Auburn, Barkley does not think current Tigers player Jabari Smith has a chance to be the first overall choice in the NBA Draft in 2022. No, he believes the award should be given to a Duke Blue Devil.

Paolo Banchero, a Duke freshman, has been predicted as a top selection this summer and has played a key role in the team’s march to the Final Four. Despite his admiration for Auburn and Smith, Barkley believes Banchero should be drafted first overall.

Auburn has a special place in Barkley’s heart. It was unsurprising to hear him campaign for Smith as the No. 1 overall choice in the 2022 NBA Draft.

Despite the Tigers’ early departure, Smith has been projected to be among the top picks in the 2017 draft. He has three-level scoring ability, explosive athleticism, and great length.

Banchero, on the other hand, Barkley feels, must be the first choice.

Coming into the NCAA Tournament, Chuck noted (h/t the Montgomery Advertiser) that he thought a few different people all had equal rights to the top slot. However, he has seen enough of Banchero to recommend him.

Smith and Gonzaga big man Chet Holmgren, another exceptional prospect who may hear his name called first, are both “loved” by Barkley. The Round Mound of Rebound, on the other hand, demanded that Banchero be taken off the board right away.

Is Chuck correct in his assessment?

Banchero and Smith are being evaluated.

This NCAA Tournament, according to Charles Barkley, has cemented Paolo Banchero’s place atop the 2022 NBA Draft class. But there’s more to player appraisal than that.

Banchero has been outstanding during March Madness, as he has done all season. He’s a 6-foot-10 forward with the ability to handle the ball and pull up over lesser players. In late-clock circumstances, the Seattle native has shown great footwork and moving on dribble drives, particularly in victories against Michigan State and Texas Tech.

Banchero also impresses with his passing abilities. Through 38 games, he’s averaging 3.1 assists per game and has at least three assists in every tournament game. When opponents cut off straight-line drives, the Blue Devils rookie throws precisely weighted lobs and dump-ins to Duke center Mark Williams and possesses the vision to make the correct basketball play.

Despite the fact that Barkley didn’t have an opportunity to scout Jabari Smith during March Madness, the Tigers star’s scoring and promise are undeniable.

Smith, unlike Banchero, struggled throughout Auburn’s NCAA Tournament run. In a second-round defeat against the Miami Hurricanes, he went 3-of-16 from the field, including 1-of-8 from beyond the arc. Even yet, Smith had some promising characteristics.

As a playmaker, the SEC Rookie of the Year made smart reads and had four assists to go along with 15 rebounds. He also shown some perimeter switchability against Miami’s fast guards.

Smith’s length, as well as his shot creation, are key selling points. This season, he hit 42 percent of his three-point attempts, with many of them coming from step-back looks to create space. The Tigers’ star, on the other hand, can go into the lane and finish through contact just as well.

It may not matter where Banchero or Smith are picked in the end. Both teenagers, like Barkley, are part of a deep class with franchise-altering potential.

The top players in the upcoming NBA draft, according to Charles Barkley, are Paolo Banchero, Jabari Smith, and Chet Holmgren. However, this class as a whole is brimming with potential.

In the Sweet 16, Purdue Boilermakers combo guard Jaden Ivey struggled against tournament favorites Saint Peter’s. But, despite possessing explosive agility and end-to-end speed in transition, he’s made huge strides as a facilitator and three-level scorer. He has the potential to be the top player in the class.

Keegan Murray of the Iowa Hawkeyes has a physique comparable to Smith’s and projects well as a 4-man who can stretch the floor and make plays on the break. AJ Griffin, Banchero’s partner, is one of the group’s greatest pure shooters and has showed more power off the bounce in recent weeks. Wisconsin guard Johnny Davis powered the Badgers with his playmaking and length, while Arizona star Bennedict Mathurin impressed with his playmaking and length.

Several NBA clubs have significant possibilities to upgrade their rosters this summer. Banchero and Smith, though, may be the two main attractions. Can Banchero prove Barkley wrong and secure his position as the best player in the draft by winning Most Outstanding Player in New Orleans?

RELATED: NBA Stars Who Burned Out During March Madness

‘Everton’s away record means everyone doubts them’

Past security assurances from U.S. were nothing but ‘a piece of paper’